A cornerstone of our switch solutions is the patented TS-4500 hydraulic switch machine. TS-4500 features a direct drive that maximizes the available power for throwing any size switch point. This innovative design features numerous efficiencies, such as minimal linkages and sealed bearings that ensure reliability, minimize maintenance and lower the overall cost of ownership.

Our TS-4500 direct-drive hydraulic switch machine is recognized for superior performance and reliability. It is now the standard in many Class I railyards in the U.S. and Canada. 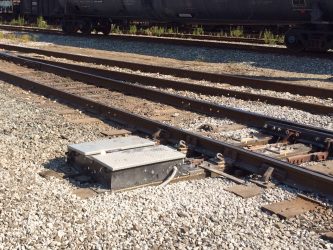 The TS-4500 has no grease fittings, solid steel hydraulic piping, and easily adjusted proximity detection system. These features as well as others make maintaining the switch less time consuming and allowing maintenance personnel more time to focus their efforts on other areas.

We understand it’s cost prohibitive to get commercial power to remote locations. Given this the TS-4500 has been designed to operate using minimal power. Also, its low power consumption allows the TS-4500 to be installed with a solar charging system. Even without a charging system installed, a fully charged battery is capable of operating the switch over 150 cycles.

Remote controlled switch machines allow train crews and yard personnel to remain out of harms reducing their risk of slips, trips, falls and back injuries commonly associated with manual switch stand operation. Safety has become fundamental in today’s society and is important to make sure all efforts to increase safety are address to insure all employee’s go home at the end of the day uninjured.

The TS-4500 remote control Dual Tone Multi Frequency (DTMF) switch machines are the answer for improving efficiency, lowering maintenance and improving safety within railyards. Gone are the days of manually hand-thrown switches. Times are hard and making the most of the manpower available has never been more important. Keeping your manpower concentrated on important tasks is key to the success of your business while also keeping personnel safe and out of harm. Remote controlled switches can be lined using your existing handheld or locomotive VHF radios. Confirmation of switch position can be provided by LED switch point indicators, audio messages or both. Start making the most of your manpower by installing remote controlled (DTMF) TS-4500 switches. 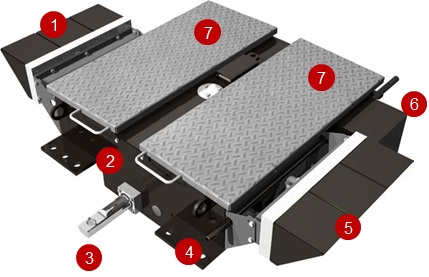